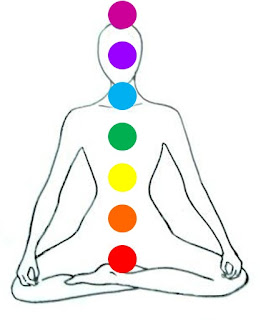 Chakras are the driving force of our inner energy system, made up of seven main energy centres controlling different parts of the body, mind and energy channels. The chakras are concentrations of spinning energy and are located in an area of the body where there is a large concentration of nerve endings. Each major chakra influences the health of a particular area of the body, as well as the colour, emotions and thoughts connected to it. As chakras penetrate the body energetically rather than physically, it is recommended that you use energy stones such as a crystal to stimulate the chakra.

Base Chakra - Red Stones
This chakra vibrates at the slowest rate in the physical body and suffuses the whole of the perineum, which is the area between the genitals and the anus. It affects the organs of elimination – kidneys, rectum and bowel. When blocked, it affects the skeletal structures including the teeth, constipation, lower back pain and varicose veins.

Sacral Chakra - Orange Stones
The sacral chakra is located the width of two fingers below the naval. It governs the reproductive system of the body and is particularly active during puberty, pregnancy and during female menopause where radical changes takes place. This chakra also affects the urinary system, abdomen and hormones.

Solar Plexus Chakra - Yellow Stones
The solar plexus chakra is located beneath the ribcage in the upper abdomen. It is the most sensitive as it is responsible for our feelings and for the development of our personality. As the Solar Plexus can hold on to emotions for a long period of time, it is important to clear it on a regular basis. Otherwise it will lead to stomach ulcers, diabetes and cancer of the digestive organs.

Heart Chakra - Green Stones
The heart chakra sits in the centre of the chest, slightly to the right of the heart. It governs circulation of the blood, the lungs and the body’s immune system. This chakra is also connected to the thymus gland. When blocked, it affects the bronchial, causing asthma and allergies as well as heart diseases.

Throat Chakra - Blue Stones
The throat chakra is located in the neck and enables us to communicate with people. It governs the oesophagus, the trachea, the larynx and our jaws and gums. It is also connected to the thyroid gland. Clear communication and creative ideas develope when this chakra is balanced.

Brow Chakra - Purple Stones
The brow chakra is located between the eyes on the bridge of the nose. This chakra is connected directly to the rear lobes of the pituitary gland and the cerebellum. It balances the metabolism of the major organs and helps with our sight, intuition and our ability to see things clearly. It rules both the hemispheres of the brain and affects the ears, sight and the central nervous system.

Crown Chakra - Violet Stones
The crown chakra is located at the top of the head in the centre where the three main bones of the skull fuse at the anterior fontanelle to several centimetres above the head; it merges with higher Soul Star Chakra. It is a highly sensitive point and should be treated with care. It connects to the pineal gland and controls the brain function. If unbalanced, it causes depression, epilepsy, anxiety and neurological disorders.


As our skin and aura form a sensitive protective wall around the chakras, it is recommended that you activate the chakras so that the desired oscillation of the healing stones can penetrate deeply. The chakras are mostly opened with light producing energy stones, such as a crystal.

Email ThisBlogThis!Share to TwitterShare to FacebookShare to Pinterest
Labels: Aura and Chakra