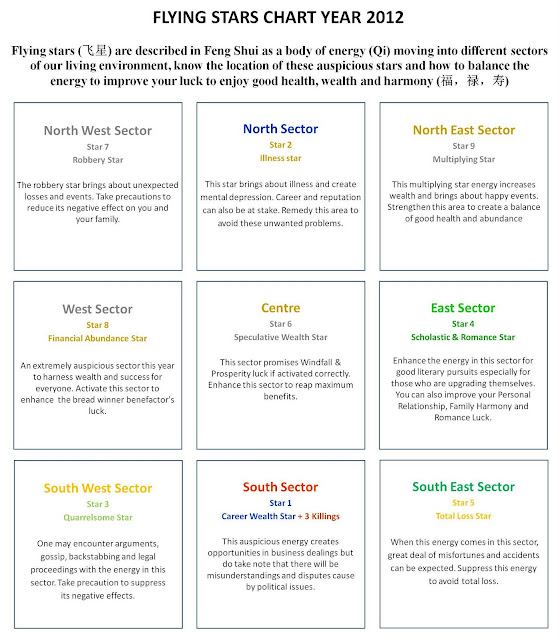 Xuan Kong Flying Stars is part of the San Yuan school of Feng Shui and therefore places greater emphasis on the aspect of time. The basic principle is that when the stars are timely, they exert positive influences and similarly when the stars are untimely, they exert negative influences. It is therefore important to understand the attributes of the Nine Stars and at the right time manifest and activate the positive stars in order to improve the Qi of the environment.

Kan (坎), the number 1 Star is the star of nobility. It is the element of water which represents intelligence, emotions and thoughts. By activating this star, it will bring about good name and wisdom.

Kun (坤), the number 2 Star is associated with the Earth element. It is also often regarded as the Illness Star. Generally, the illness star brings about poor health to the residents and even miscarriages when the Earth Star 2 meet the Water Star 1.

Zhen (震), the number 3 Star is the star of aggression and conflicts. When activated untimely, it invites gossip, rumours, back stabbing and lawsuits. Normally, this is accompanied by loss of money. In some cases, it also causes health problems related to the liver and limbs.

Xun (巽), the number 4 Star is the Literary Arts Star. This is a star for literary pursuits and is usually best activated in the study room. When used with the Water formations, it can also activate Peach Blossom luck for its residents. It is therefore often regarded as a relationship star also. However, when activated untimely, it can invite scandals like adultery.

The number 5 Star is generally a negative star. It does not belong to any trigram and is often the most feared star among the 9 Stars. When activated, it brings about illnesses, loss of money and even death. It is commonly known as the Total Loss Star. It is best left alone and any renovation for the affected sector should be avoided for that year.

Qian (乾), the number 6 Star is the star of power and status. When activated timely, it brings about promotions and increase income. When combines with number 1 star, it becomes extremely potent and increases businesses and income by leaps and bounds.

Dui (兌), the number 7 Star is generally not a favoured star. When manifested negatively, it can cause robbery or loss of wealth through blackmailing or court cases. In some cases, it can create problems related to Peach Blossom like sexual diseases.

Gen (艮), the number 8 star is primarily the wealth and prosperity star. This is the most favoured star and when activated timely, brings about an increased income to the residents. As the number 8 Star belongs to the Earth element, most people will use crystals to activate this sector.

Li (离), the number 9 Star, is related to happy events and promotions. It is a star that brings joy, fame and glory to the residents when activated timely. It encourages one to display his highest potential and is thus known as the brilliant star as well.


The above explains the attributes and qualities of the 9 Stars. However, in order for the star qualities to be manifested, the star must be first activated. In classic Feng Shui, a Qi map can be super imposed on the floor plan. And by identifying the location of the stars and by understanding how it will affect the residents life and needs, we can activate the stars to bring about a better quality of life. To know more information, please contact any of our consultants who will be glad to explain to you more about the Xuan Kong Flying Stars.