Prayer beads are used by members of religious tradition to count the repetitions of prayers, chants or mantras. They may have physical, metaphysical and psychological effects on the users. Traditionally, prayer beads are tools used to count the number of times a chant is recited during meditation. They may be made of different materials but those made of crystals are most revered since ancient times. This is because it is believed that the vibration from the crystals is able to enhance the clarity of mind during prayers or meditation and thus brings about wellness for the body, mind and soul.

The number of beads varies depending on different religions. Islamic prayer beads called “Tasbih” have either 33 or 99 beads while Buddhists and Hindus use the “Japa Mala” which is usually 108 beads, or 27 which are counted four times. The Roman Catholics use “Rosary” which originates from the Latin word meaning Rose Garden or Garland of Roses. 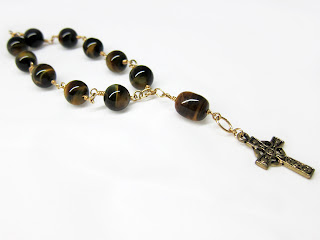 The Rosary is a traditional Catholic devotion tool for prayers. The term denotes to the prayer beads used to count the series of prayers that make up a rosary prayer. The praying of each decade is accompanied by meditation on one of the ‘Mysteries of the Rosary’, which recalls the life of Jesus Christ. The rosary prayers consist of repeated sequences of the Lord's Prayer followed by ten praying of the ‘Hail Mary’ and a single praying of "Glory Be to the Father" and sometimes accompanied by a Fatima Prayer; each of these sequences is known as a decade.

As suggested by the Pope John Paul II the Joyful mysteries are said on Monday and Saturday, the Luminous on Thursday, the Sorrowful on Tuesday and Friday, and the Glorious on Wednesday and Sunday (with this exception: Sundays of Christmas season - The Joyful; Sundays of Lent - Sorrowful) 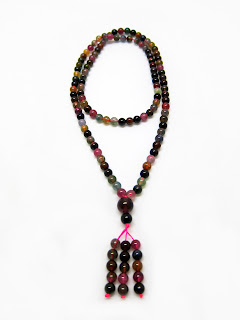 In Buddhism, prayers beads are called Mala. They are used for keeping count while reciting, chanting or mentally repeating a mantra or a name of a Deity. Mantras are normally repeated hundreds of times and the mala is used so that one can focus on the meaning or sound of the mantra. The Mala beads are moved in rhythm with the breath and the mantra, so that both sleep and excessive mental distraction can be prevented by this action. In this way, it automatically conditions the mind to a meditative state.

How to Pray with your Mala Beads

The mala is traditionally held in the right hand :
The practice begins at the sumeru, the larger bead and continues around the loop until the sumeru is reached again. The sumeru bead is never passed over. So if you plan to do more than 1 round, turn the mala around and proceed in the reverse direction. 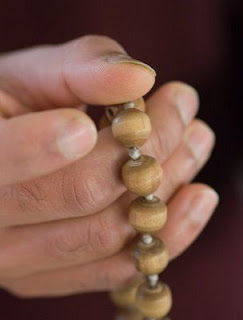