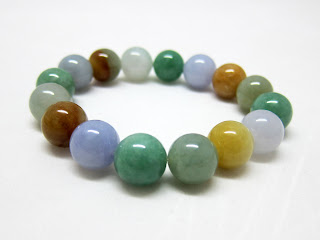 To the Chinese, Jadeite jade and Nephrite is considered the epitome of all precious stones. It is prized for its beauty and is believed to protect against illness, accidents and bad luck. In gemstone therapy, it is said that they can enhance mental and spiritual awareness by elevating and purifying one’s thought. It is believed that the gentle energy of Jadeite jade and Nephrite penetrate deep into the body as a consequence of higher frequency. Thus it can heal diseases of the spleen, liver and intestinal tract. Jade offers protection especially to the kidneys. It can even purge contaminants and deposits from the kidneys and liver. On the whole, it strengthens the whole immune system and regulates metabolism in both the body and mind. 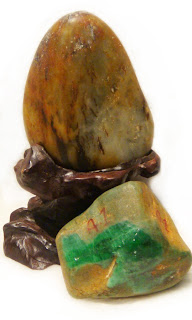 Traditionally Jadeite jade is not only found in China but in other parts of the world as well. In ancient Egypt, the stone was referred to as the stone of love, inner peace, harmony and equilibrium. The Maoris from New Zealand began carving weapons from native Jade in early times. In ancient China, Jadeite jade is said to be the link between heaven and earth and when worn by mankind, forms the holy trinity of heaven’s luck, earth’s luck and man’s luck. However, the Chinese were often confused with Jadeite jade and Nephrite since both minerals resemblance each other. It was only in the early 19th century that Gemmologist found that they differ in mineral composition and colours.

Nephrite, with its greasy lustre comes in many fine nuances of white, yellow, grey and honey brown and can be found in many parts of the world apart from China. However, the most prized Nephrite remains the Xin Jiang He Tian Bai Yu. With its fine texture and greasy lustre, they are also commonly known as the “mutton fat jade “. Today, the “mutton fat jade” attracts some of the highest prices in the jade market. Nephrite can also be found in Qinghai and Russia.


However, green Jadeite jade has been most favoured since ancient times. Green Jadeite has the greatest variety of colour in terms of tone, lustre and depth of colour. The presence of chemical Chromium and sometimes Iron gives the brilliant green colour tone which is considered the most popular colour. Other types of green include the pea green, oily green, Fu Yung green and the flower green. Other favoured colours are purple which can come in several tones due to the presence of manganese, red and yellow or even black.

Today, the ice or glass variety is also becoming very popular. As the name implies, the ice or glass jade is colourless and highly transparent. This type of Jadeite jade has a fine grain texture and a very lustre look.

In recent years, the price of Jadeite jade has risen tremendously due to increased demand and also because the mineral is becoming rarer now. As such many traders have resorted to unorthodox methods of treatment of the mineral by using poor quality Jadeite jade.

Heat treatment is one of the methods to enhance the colour of Jadeite jade. Other methods include using colour dye or by using acid treatment. It is advisable to wear only Grade A or untreated Jade as the chemicals used during treatment can cause allergies to the skin. For this reason, only untreated Jade should be used for holistic therapy work.

Email ThisBlogThis!Share to TwitterShare to FacebookShare to Pinterest
Labels: Jade