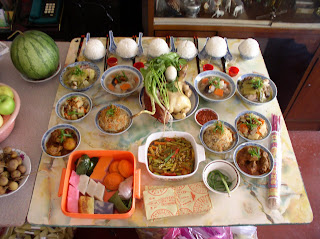 For thousands of years, people have been deluded and superstitious about ghost. Ironically the seventh month in the lunar calendar is called the Hungry Ghost Month. On the first day of the seventh month, it is believed that the Gates of Hell open to allow ghosts and spirits access to the world of the living.

Although there are many myths and stories about the Hungry Ghost Month, it is in fact a time to be grateful and show compassion to the dead. According to tradition, filial piety is extended to the ancestors even after their death. Thus, the Chinese would worship their ancestors with elaborate meals during this time of the year. Other activities include burning incense, joss paper, and a papier-mâché form of material items such as clothes, gold and other fine goods for the visiting spirits of the ancestors.

Besides worshipping their ancestors, many people also believed that they can appease the Hungry Ghosts by offering food and paper money to them. Many makeshift altars are set up along sidewalk or outside the house to offer food, paper money and paper clothes. Some people even perform Taoists and Buddhists rituals to transmute and absolve the sufferings of the deceased. In reality, they are extending an act of compassion to the spirits whose family no longer venerated their ancestors. 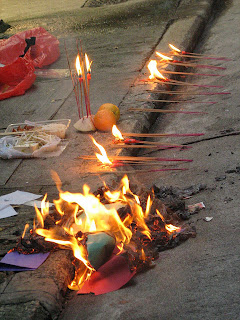 In Asian countries, some people may hold large celebrations with live performance by local as well as overseas singers while other people simply release miniature paper boats and lanterns on water to give direction to the lost ghosts and spirits of the ancestors. In reality, there is no right or wrong as long you show an act of compassion and love for your late ancestors or the dead.

Nonetheless, many people still feel uncomfortable during this month. Moving into a new house or commencing a new business is still considered inauspicious. People are discouraged to travel or even go to the sea to swim for fear of water spirits. As a result, these taboos have instilled much fear in many people. Whenever we have fears, our auric fields will be weakened and our vibration will drop. As a result, you may attract negative feelings or sometimes even have sightings during this period. It is therefore, recommended to carry crystals that help to keep your vibration high or even deflect such negative energies. Black Tourmaline and Obsidian is recommended as these stones have the ability to deflect negative energies. Carrying one with you would make you feel safe during this period. Other crystals like Clear Quartz, Moldavite and Nuumite can also increase your vibration and reduce your anxiety. If you are constantly having nightmares, place an Amethyst and Rose Quartz tumble under your pillow. The synergy of these two stones will keep you relax and have a good night sleep. So bring out all your crystals today if all those myths and stories are making you scared during the Hungry Ghost Month.
Posted by New Age FSG Blog at 07:52

Email ThisBlogThis!Share to TwitterShare to FacebookShare to Pinterest
Labels: Festivals