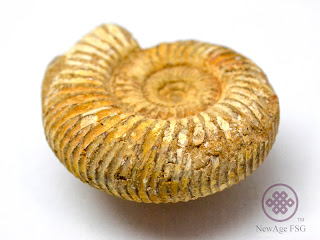 Fossilization takes millions of years. Only a very small percentage of all living things are fossilized. Just the right combination of heat and pressure created this geological phenomenon. Fossils have been buried for millions of years absorbing a substantial amount of both the Earth’s and the universe’s cosmic energy.

Fossil Stones were once thought to be stony casts of ancient times that were once grown in the earth from seeds descendant from the realms of the stars.

The esoteric properties of such fossils and fossil stones include promoting quality and excellence, assist one in manifesting ones accomplishments, creating structures and aid one to open to changes and new ideas. When the stone is placed in the home, it promotes a happy family.

It is also known to promote the flow of “Qi” throughout the body, enhancing one’s well-being and reducing the body’s toxicity. Thus in healing, such fossils can be used to assist with curing diseases and aliments of the skeletal system, bones, hands and feet. It is also known to stimulate the thymus gland.

Fossils are also helpful in keeping one grounded, aiding in stability and physically stamina. Fossils have a very calming and soothing energy that helps to release stress, promote tranquillity, contentment and comfort. Healers use fossils to enhance telepathy and stimulate the mind.

Astrologically Fossil Stones are connected with the zodiac sun sign of Virgo.

The Ammolite is derived from the ammonite fossil. Metaphysically the Ammolite promotes good business dealings and success in business ventures. In this aspect, anyone who possesses the Ammolite will also receive prosperity and good fortune.

Experts within the feng shui circle recognized the significant properties of the ammolite gemstone. Ammolite’s rich colours stimulate creativity, energy, wisdom, intellect and wealth. Not only does it bring balance to a person’s body, but also to a person’s surroundings, and when it is placed in the office.

Fossilized shark tooth is used at the 5th Chakra (Throat Chakra) to relieve pain associated with the teeth and gums and to connect one with their ancestors and to remember one’s past lives.

It is an excellent stone for past life work. It also works wonderfully for calming anxiety. It helps, with communication and enhances our ability to understand communications.

Physically, the fossilized shark tooth is used for healing of paralysis, broken bones, hearing, vigour and regulation of our body temperature. This stone is often used to promote strong bone growth. 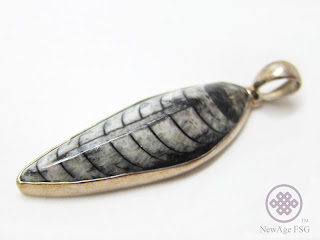 Like the ammonite it is a cephalopod. Orthoceras are the fossilized remains of an extinct marine creature. It has a long conical shape. Orthoceras was one of the first squid like creatures to appear in the fossil record. Such fossils are believed to increase one’s life span, reduce toxins, reduce anxiety and stress, balance our emotions and make one more confident. They promote a sense of pride and success in business.

Healers have used fossils to enhance telepathy and stimulate the mind. Traditionally, such fossils have been used to aid in reducing tiredness, fatigue, digestive disorders, and rheumatism.

Sand Dollars are another type of sea urchin, which feed by lifting sediment from the sea bed. They are unusual because they are flat with holes through them. The food would be pushed up through these holes and passed along towards the months.

These 65 million years old fossils found in Madagascar are powerful reminders of Earth’s beginning. They hold the ancient DNA and are said to have supernatural healing powers. The ancient civilization believes that within these fossils, there lived a wisdom that could not be explained. Use your sand dollars to bring deep healing and cleansing to yourselves.
Posted by New Age FSG Blog at 20:27