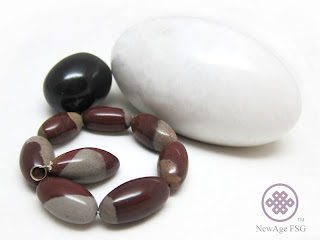 Shiva Lingam is considered one of the most ancient sacred stone. Natural Shiva Lingam comes from the Narmada River in the Maridhata Mountains which is one of India’s seven holy sites. The villagers would gather the stones from the river and hand polish them so that they become smooth. Their colours vary but most of them are tan with brown patches on the stone. Among the rarest is the Black Lingam. They are considered very sacred and possess highly protective energies. In the past, you can only find them in Hindu temples and only recently have become available for export. In Tantra, the egg shape embodies the masculine energy; dynamic expression and wisdom while the brown marking depicts female energy; wisdom and intuition. The Shiva Lingam thus unifies the dualistic male and female world into harmonious balance.

Its mineral composition includes Crypto-Crystalline Quartz, Silicon Dioxide and Agate which carry a powerful energetic charge. Other unidentified particles are believed to come from a meteorite that landed in the river that formed the Shiva Lingam many centuries ago. 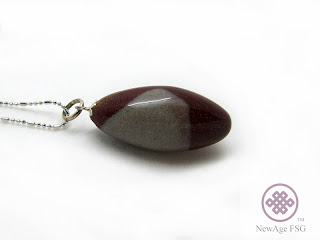 The Shiva Lingam can amplify the electro-magnetic field of the body and stimulate the meridians. In this way, the Shiva Lingam balances the polarities of the body and support general healing for the body. This stone also resonates with energies of all the elements – Earth, Fire, Water and Air and can be used to charge the chakra system to boost vitality.

Shiva Lingam resonates deeply with Mother Earth and their energy carries a strong feeling of divinity and sacredness. It has a special affinity with Moldavite and when used together, they boost your pranic energy as you connect with the Creator. This is an excellent stone for healing and spiritual transformation.
Posted by New Age FSG Blog at 21:38

Email ThisBlogThis!Share to TwitterShare to FacebookShare to Pinterest
Labels: Crystals