What does the Fingers and Thumb say about you?

Before studying the lines and markings on the palm itself, it is advisable to study the hand and finger shapes. This information should be collected as a whole as it gives you a general picture of the character and personality of the person. It is also good to note the undertones of the skin and the texture of the hand as well.

Names of the Fingers 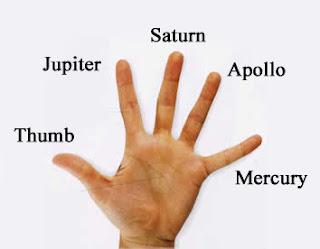 The Thumb indicates the character, willpower and temper.

The Jupiter finger also known as the index finger, indicates self confidence, pride and ego.

The Apollo finger also known as the ring finger, indicates the creativity, emotions and the ability to feel happy.

The Mercury finger also known as the little finger, indicates your communication abilities and integrity.

A pointed finger has a noticeably pointed tip. It shows someone is highly creative and sensitive. They are very refined, with a highly developed aesthetic sense and good taste. However, he can be overly emotional and so it can be difficult for him to cope with harsh realities of life.

A square finger tip is level at the top and denotes someone who is conventional, practical and organized. These people prefer to lead a simple life and are excellent workers. They normally have a strong grasp of reality and are easily contented with life.

A spatulate finger widens towards the tip. It indicates someone who is energetic and innovative. These people are highly intelligent and are mentally versatile. They are able to handle most situations and other people and often excel in their career.

Email ThisBlogThis!Share to TwitterShare to FacebookShare to Pinterest
Labels: Palmistry