Meteorites are much heavier than ordinary rocks. Their unusual weight is due to its high iron content. Meteorite Stones would feel heavier than most rocks as they have travelled in space for millions of years, accumulating the cosmic energies and vibrations of the universe. 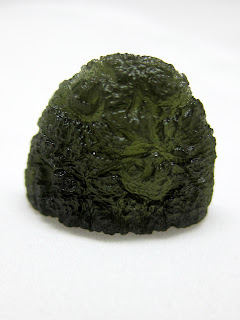 The most accepted theory of Moldavite is the result of a meteorite impact that splashed a molten ball of what is known as Moldavite into the Czech Republic and Moravia some 15 million years ago.

The most sort after Moldavites are translucent, glowing green but the colour can vary from olive green to a bright almost blue green. Etching from naturally occurring acids and weather conditions produce the rough surface texture of moldavite. The Moldau River in Czech is the only known locality for Moldavite. They are among the rarest minerals on earth, and are prized for thousands of years till this very day.

Metaphysics Properties
Known as one of the 12 synergy stones, Moldavite is a gemstone for transformation on all levels. It works well at the 3rd eye, the throat chakra and as well as the crown chakra. 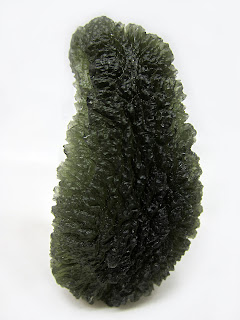 This stone facilitates strong clear and direct connection between our spiritual consciousness and the higher planes of light. Thus it is helpful for personal and spiritual growth, it releases old habits and can be used as a catalyst for transition in one’s physical, spiritual and emotional well being.

It can open and activate all the chakras. Moldavite has special connection to the heart Chakra that helps one to move forward in his spiritual path. It is a powerful tool for meditation and intuition. It is rumoured that Moldavite carries good fortune to its owner.

Moldavites have powerful amplifying effect and are excellent to use with other stones because it can magnify their energies. It can take you beyond your self-limiting belief system into uncharted realms of infinite possibilities.

When you hold, wear, meditate or carry a Moldavite, it will raise your vibrations and increases your energy field. The universal law of attraction says what we focus on becomes a reality. Moldavite is a great stone to use to make changes in your life and to easily manifest your heart desires and dreams.

Moldavite is one of the few tektites that are of gem quality and able to be cut and faceted into beautiful jewelry. Pendants of this stone close to its natural form or cut and polished into gems

Tektite is small pieces of meteorite sometimes called the stone of ‘good luck’, they are found on Earth within the narrow equatorial belt of 80 degrees wide. They have been found in Thailand, Australia, Vietnam and the Philippines. Tektite is an extraterrestrial meteorite which had penetrated Earth millions of years ago. Tektites come in different shapes, sizes and texture. While passing through the Earth’s atmosphere at hypersonic speeds, Tektite may have been stretched while in a molten state into its different textures and sizes. They usually have a heavily pitted surface and appear black, but when held up to the light, you can sometimes see a golden tint in the translucent areas around the edges. Tektite is rich in silicon dioxide.

Metaphysics Properties
Tektites are believed to bring wealth and fertility, and help to increase and strengthen one’s energy field. Tektite allows you to attract others with similar energies thus it is a good stone to use if you want to attract like-minded friends and business partners.

Tektite stimulates one’s psychic and intuitive abilities and helps to clear and open our chakras. Carrying or wearing a Tektite can heighten one’s vibration and energy field allowing one to release negative energies. Tektites can also help expand our consciousness which makes it a great stone to use while meditating.

Tektite’s high vibration contains the energy of the universe. It enables a person to see beyond the five senses into the astral and other realms. Tektite enhances compassion, kindness and even friendship. This meteorite assist us in letting go of unpleasant and negative experiences, as it helps to balance the Yin and the Yang aspects of one’s personality and vibrations.

Tektite helps to clear all the chakras in one’s body and brings balance to the mind, body and soul. Physically, this stone can be used in healing disorders and controlling unknown diseases. Tektite is self cleansing and just by carrying or wearing a Tektite can heighten the vibration of one’s auric field and protects its owner from negative energies.